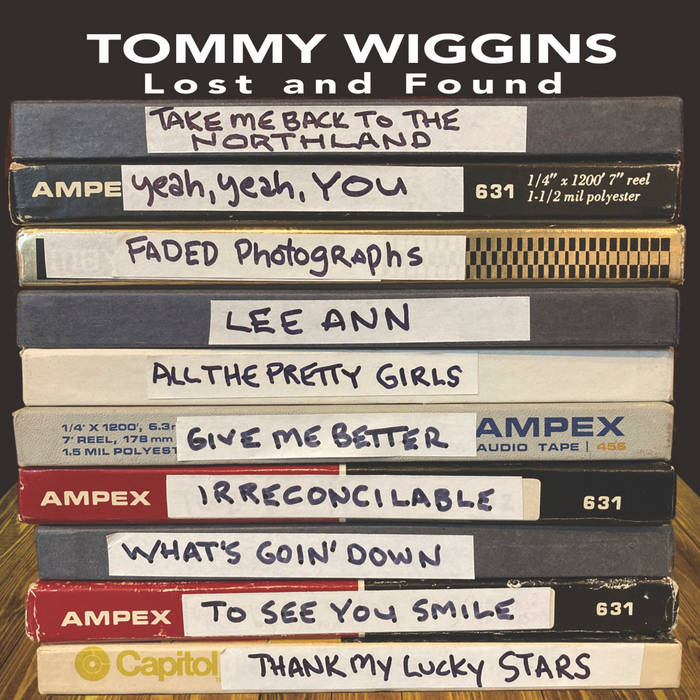 Tommy Wiggins is a lifer. A prolific songwriter for more than 50 years, he has woven his own tapestry of American roots music, leaving a unique stamp upon the intersecting worlds of rock, country, blues, soul, and folk. He's built a resume that's as diverse as his music, serving as an engineer, producer, educator, multi-instrumentalist, and five-time Emmy-winning TV host. For Wiggins, this isn't just a career; it's a legacy in the making.

Lost and Found finds him sifting through his personal archives, pulling together a track list of previously-unreleased music that helps tell the story of an inspired, tireless creator. "As songwriters, we create so many songs that never see a release date," he explains. "We pour every bit of our hearts and our souls into them, but most remain unheard forever. I wanted to revisit some of the songs that didn't make it onto a particular album. Perhaps they didn't fit on the records I was making at the time — but they all have a home here."

Songs like "Take Me Back to The Northland" date back to the early 1980s, when Wiggins — a Minnesota native who launched his career with free-spirited '70s bands like Freeland — was still in the early stages of his solo career. Most of the material was recorded during the 1990s and early 2000s, featuring a cast of collaborators and co-conspirators who've partnered with Wiggins over the decades. The result is a time capsule of rootsy rock & roll, with each track serving as its own timestamp.

"These songs are a snapshot of a time and a place," Wiggins says. "They're a reminder of where I was, who I was with, and the life events that were inspiring me to write."

They also sound as vital today as they did during their time of creation. After all, each is a chapter in Wiggins' ongoing story, featuring not only the full spread of his abilities as a songwriter, but also his wide-ranging chops as a recording artist. He isn't just the album's frontman; he's also the keyboardist, the engineer, the bandleader, and the artistic driving force. Consider him a one-stop songwriting shop, capable of shepherding a piece of music through each stage of creation, recording, and release.

Lost and Found is a glimpse at Tommy Wiggins' past, presented by an artist whose present is just as prolific as his earlier days.

"I was writing songs 50 years ago," he says, "and I'm amazed that I continue to be as excited about music now as I was back then. Many songwriters have a big arc, and they stop writing at some point… but I still have new music in my head every single day, and I'm still sharpening the craft of making songs. I'm going to continue making more snapshots. Oh, and Freeland’s making another record.”
Andrew Leahey

1. TAKE ME BACK TO THE NORTHLAND
I wrote this dancehall rocker in 1981, recorded it with my hot band in 1991, and finally mixed it in 2021. “Take me back to the Northland, back to where I belong. Take me back to my homeland and let me sing my song.” Roots run deep.
Tommy – Vocal, Organ, Piano
Backing Vocals - Jan Reimer, Sherie Tazelaar
Guitars – Jeff Christensen
Tenor Sax – David Marden
Bass – Steve Keys
Drums – Mike Hurley
Recorded 1991 at HTC Studio A, Eden Prairie, MN
Engineers – Tom Jensen, Steve Glaser
Mixed – 2021 by Tommy at Tommy’s Tracks, Nashville, TN

4. LEE ANN
“Love takes the easy road underneath the moon. It’ll wind around your heart all the way ‘till June. In a little country church outside of town, he looked into her eyes with everyone around. He said “Lee Ann will you be my country girl?”
Tommy - Vocal, Acoustic Guitar, Wurlitzer Electric Piano, Accordion
Backing Vocals – Jan Reimer and Tommy
Electric Guitar – Jeff Christensen
Bass – Steve Keys
Drums, Cowbell – Dave Pedersen
Recorded 1993 at Composers Workshop, St. Paul, MN
Engineer – Leonard John
Mixed – 1998 by Tommy at The Studio Guy, Moreland Hills, OH

7. IRRECONCILABLE
“I refuse to hear the sound of the slamming door. Don’t wanna know the reason she’s not there anymore. Don’t go tell me that I lost everything I love. A mystery, whatever was she thinking?”
Tommy – Vocals, Acoustic Guitars, Bass, Fender Rhodes, Organ, Accordion, Percussion
Recorded and mixed 2002 by Tommy at The Studio Guy, Moreland Hills, OH

8. WHAT'S GOIN' DOWN
“Same old story in every town. Everybody tryin’ to wrap their heads around...what’s goin’ down.”
Tommy – Vocals, Acoustic Guitars, Percussion
Recorded and Mixed – 2008 by Tommy at The Studio Guy, Moreland Hills, OH

10. THANK MY LUCKY STARS
“If you ask me how I got to be me, I would say that there are three lucky stars up in the sky that I set my compass by. The brightest one would be her love, a life she let me be part of. A journey that I’d never dream of making.”
Tommy – Vocals, Nylon String Guitars, Piano, Zoom Beat Box
Dreadlock David McDougald - Bass
Recorded 2011 at The Studio Guy, Moreland Hills, OH
Engineer - Dave Towne
Mixed – 2021 by Tommy at Tommy’s Tracks, Nashville, TN

©p 2021 Chilidog Records - “Keeping the heart in the art since 1980.”
Tommy’s recordings can be found at music.tommywiggins.com